A child prodigy, Kyōsai’s work is humorous, provocative, energetic, and outrageous. The first solo exhibition of his work in the United Kingdom since 1993, it explores the historical context of his art, including the political, social, and cultural changes that took place in Japan during his time. 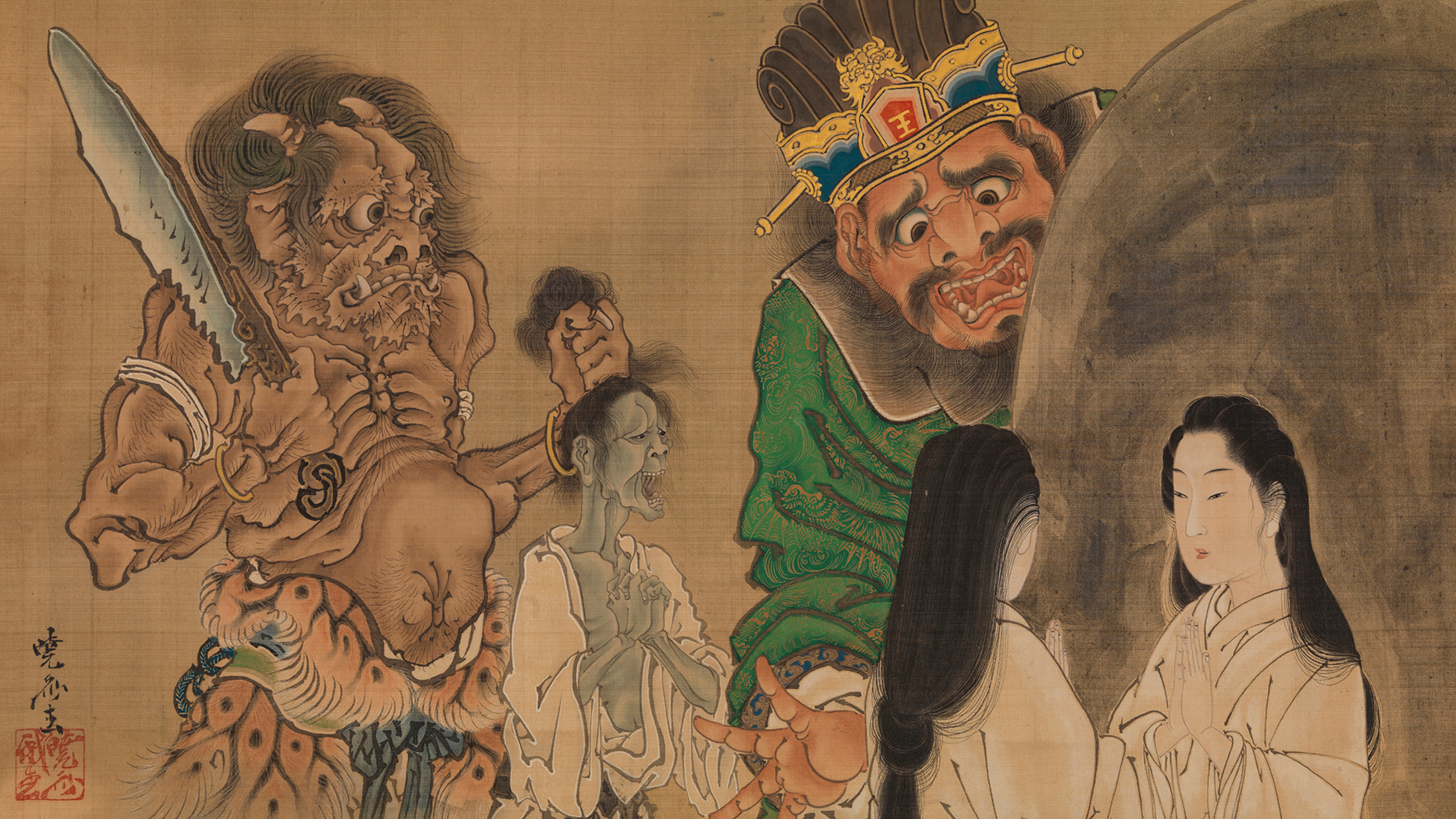 Initially a pupil of the ukiyo-e artist Utagawa Kuniyoshi (1798 – 1861) before training at Japan’s celebrated Kano school, Kyōsai had an inexhaustible curiosity and an insatiable need to engage with the world around him. Not one to shy away from incorporating new elements into his traditional studies, his revolutionary style challenged the rigid artistic conventions of his day. 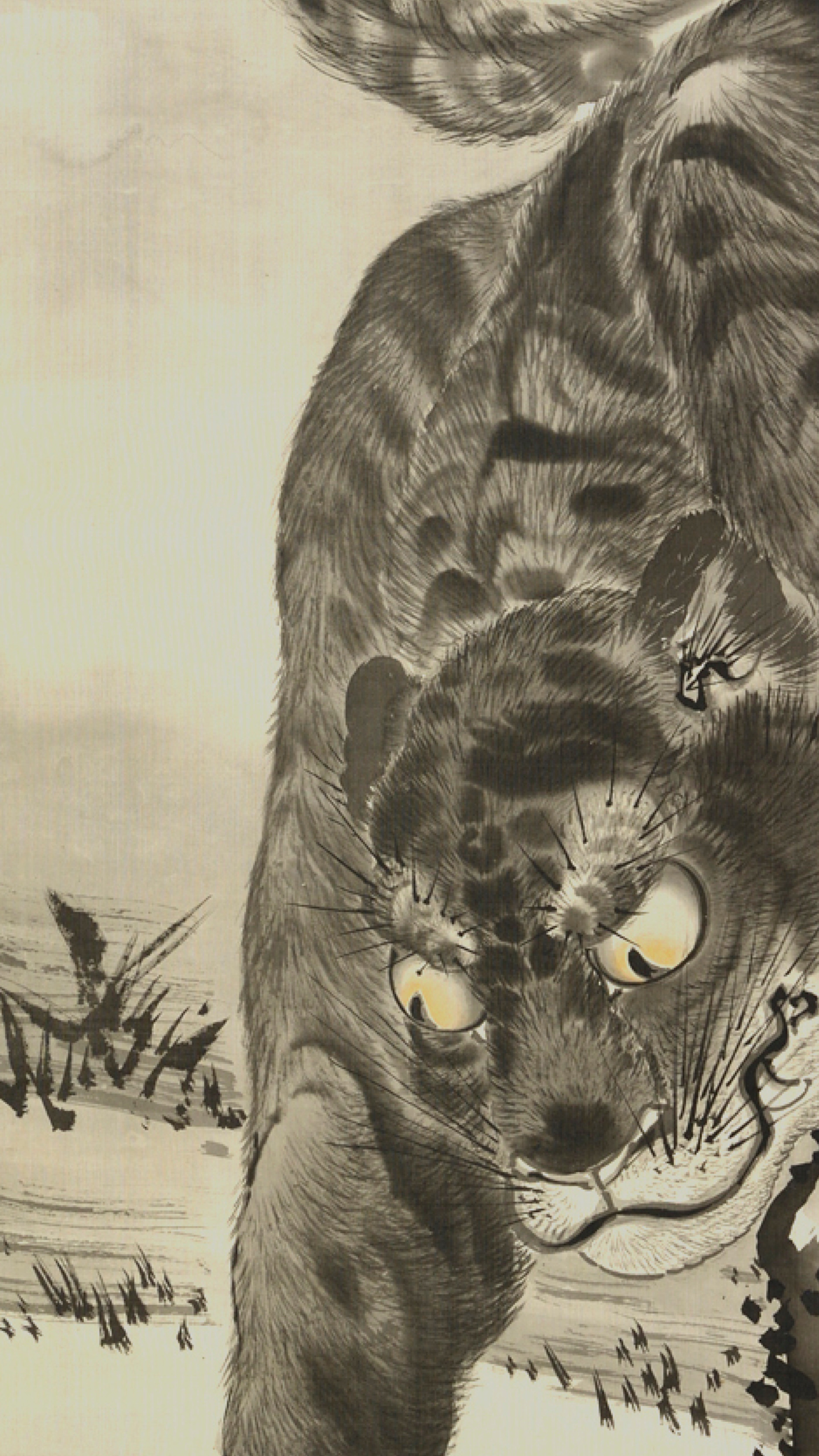 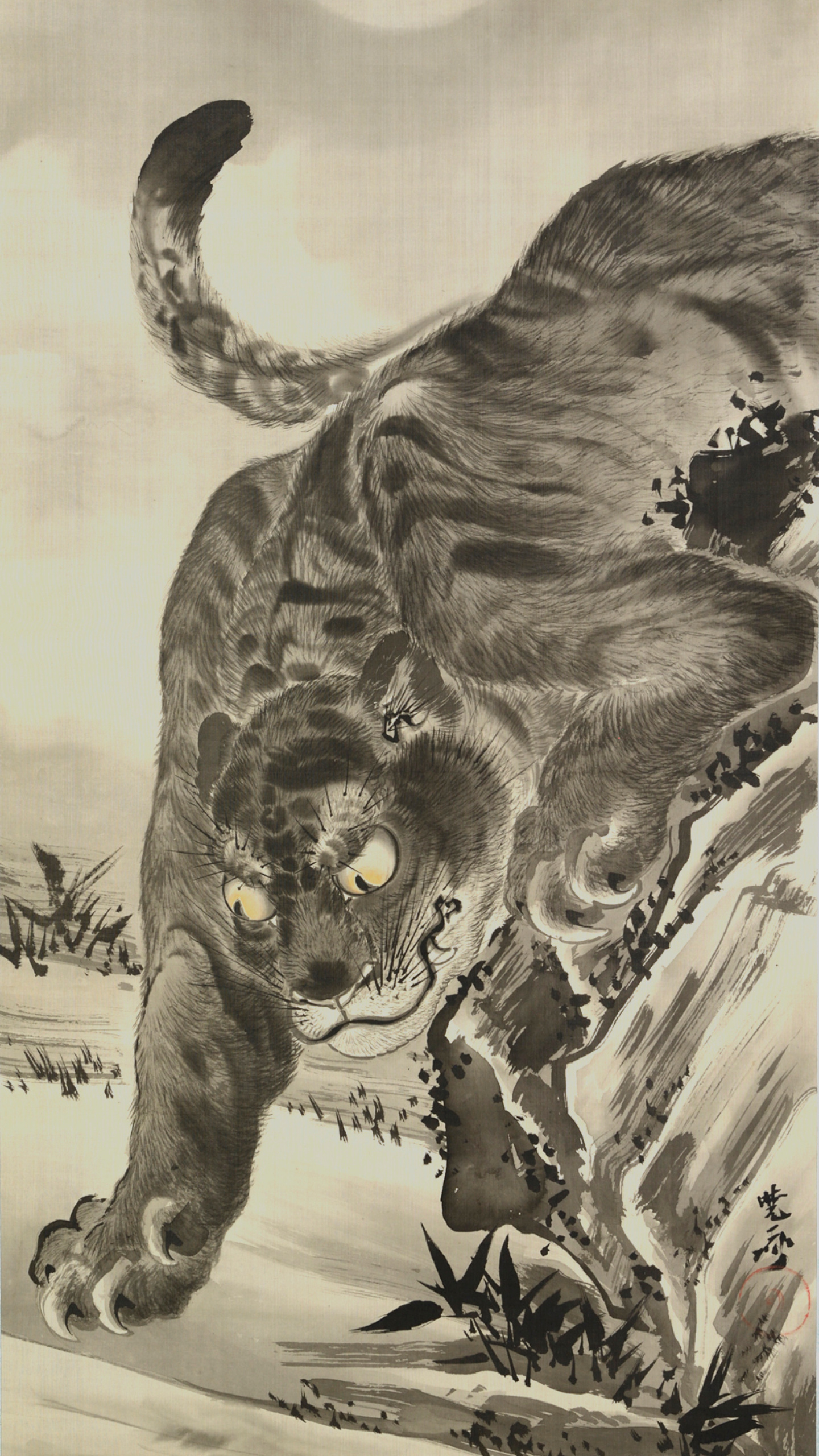 The exhibition focuses largely on the art of sekiga, ‘spontaneous paintings’, produced at ‘calligraphy and painting parties’ (shogakai), often fuelled by impressive amounts of saké. Many of these works reveal a comical twist which play on conventions or reflects the artist’s take on society.

Displayed alongside these spontaneous works are a selection of his highly detailed studio paintings that reveal the wide subject range which he referenced. 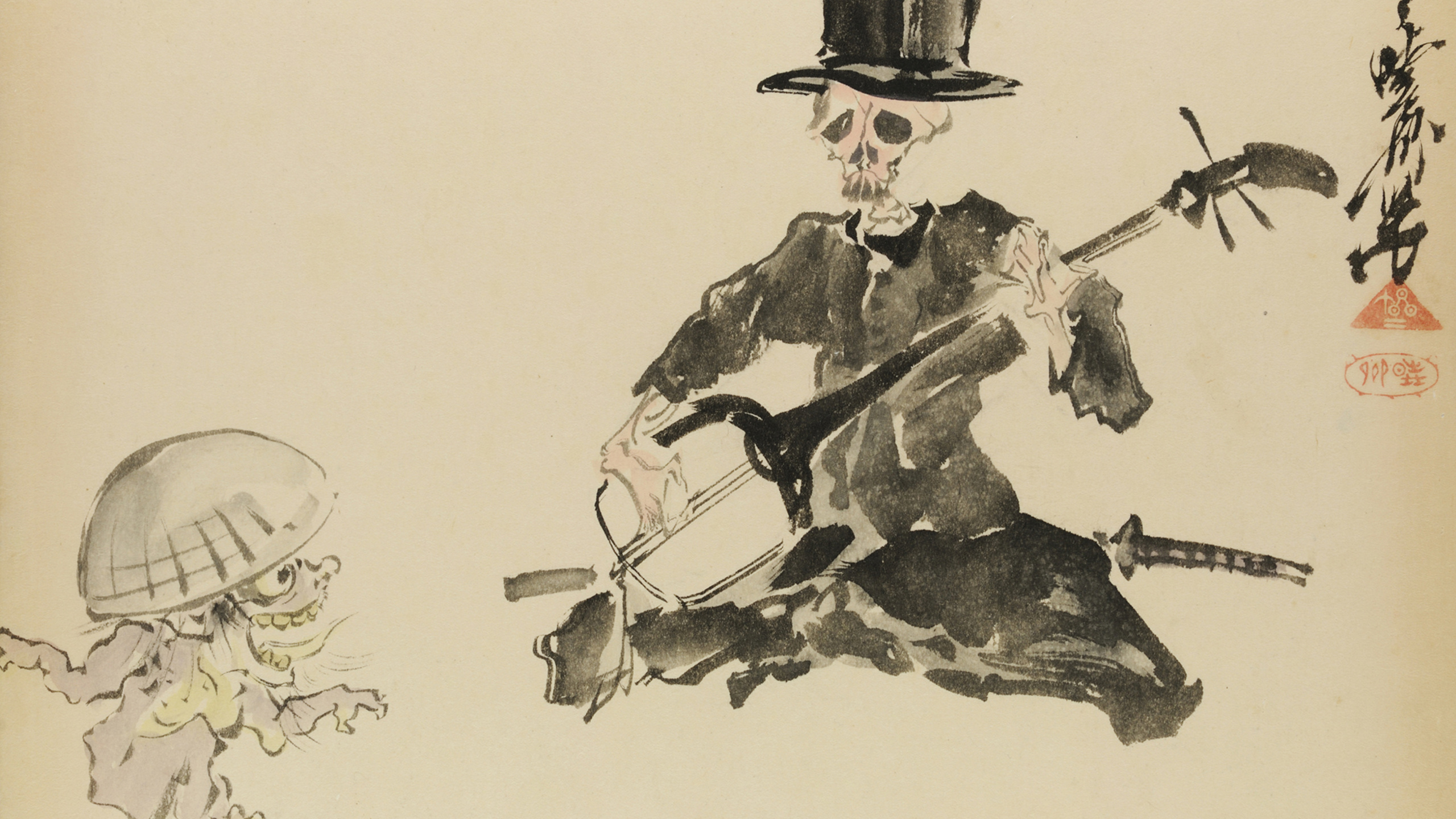 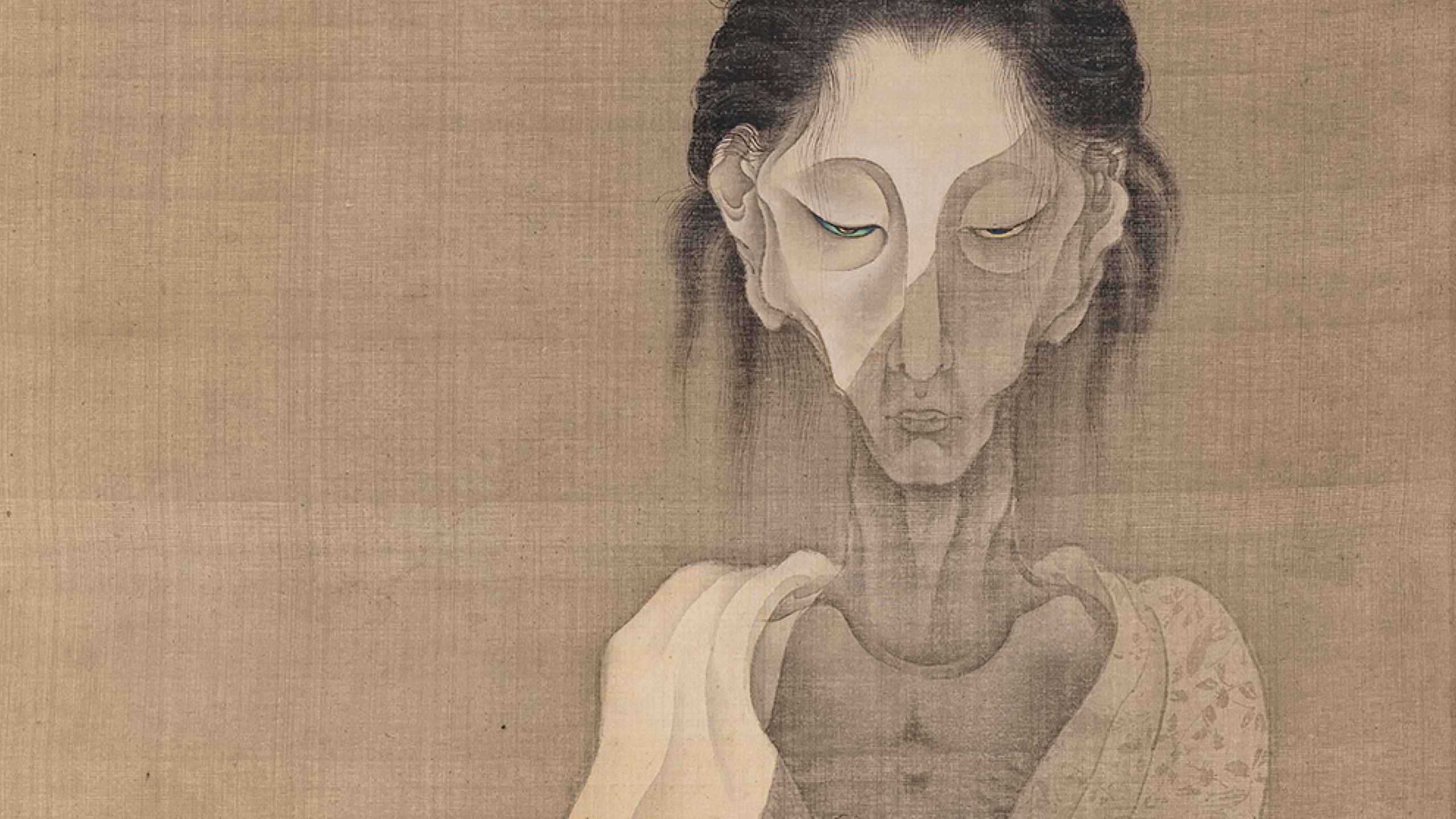 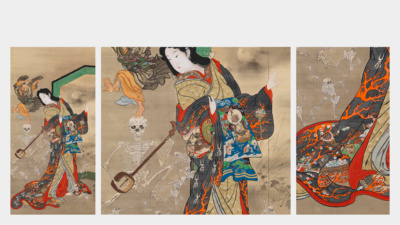 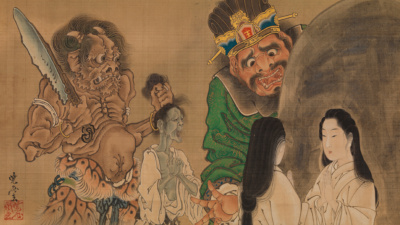 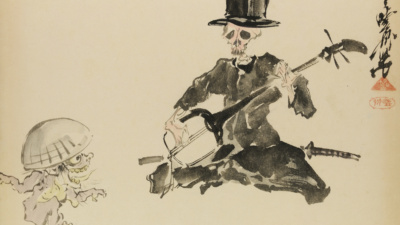 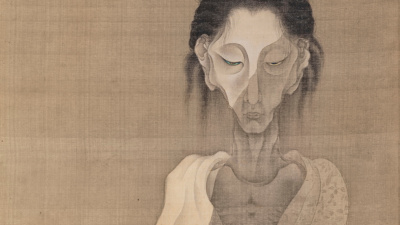 An exploration of three themes, the first section, From Tradition to Innovation, highlights Kyōsai’s representative works which demonstrate the variety of genres and styles in which he painted. These works reveal Kyōsai’s firm foundation as a trained academic painter and provide a distinct contrast to his spontaneous paintings. Thanks to his extensive mastery of traditional practices, these works are painted with considerable freedom and invention.

The second section, Laughing at Modernity, will introduce Kyōsai within the historical setting of mid to late 19th century Japan. Prints and paintings depict the introduction of Western culture to Japan, encounters with Europeans and Americans, domestic political events and civil wars. In these pieces, contemporary topics are treated with humour, with human figures or ‘humanised’ animals often created in order to overcome strict political censorship.

The final section, The Artist meets his Public, focuses on spontaneous paintings and collaborative works. Collaboration often occurred at gatherings, and was a vital part of the creative process in 19th century Japan. Some of the spontaneously painted compositions are ‘drunken paintings’, which reveal the essence of Kyōsai’s virtuosity as a painter with their wilder and freer brush strokes. Kyōsai also painted comical shunga (sexually explicit images), often impromptu in front of an audience.

Having most recently having posed as an important reference for modern manga, tattoo artists and contemporary painters, this opportunity for the public to see the first monographic exhibition of the revolutionary artist’s work in over 85 years is not one that should be considered lightly. Around 80 works are included – many of which have never been exhibited or published – all drawn from the extensive collection of Israel Goldman.

This exhibition has been organised by the Royal Academy of Arts, London. Curated by Dr Sadamura Koto, Robert and Lisa Sainsbury Fellow, Sainsbury Institute for the Study of Japanese Arts and Cultures and Visiting Researcher in the Asia Department at the British Museum, and Israel Goldman. In conjunction with Dr Adrian Locke, Chief Curator, Royal Academy of Arts.