A BRIEF HISTORY OF COMBS

You might not think much of that celluloid acetate comb sitting in your bathroom drawer. Much less consider that it might have a rich, centuries-old history that spans cultures and continents. Indeed, you should think again, as we’re about to school you on the historic evolution of the comb.

Since their inception, combs crafted from precious materials were highly valued. The most valuable comb in the world dates back to the 5th century BC, and is made from ten ounces of pure gold. It was found in the tomb of a Scythian leader near the Black Sea. The world’s most celebrated comb was carved during the 18th century, out of ivory from an extinct mammoth species in eastern Siberia. And before the 19th century, ornamental combs were among the most valuable possessions one could own throughout China and Japan. How exactly did these rich displays of craftsmanship become mere everyday objects – or is it the other way around? 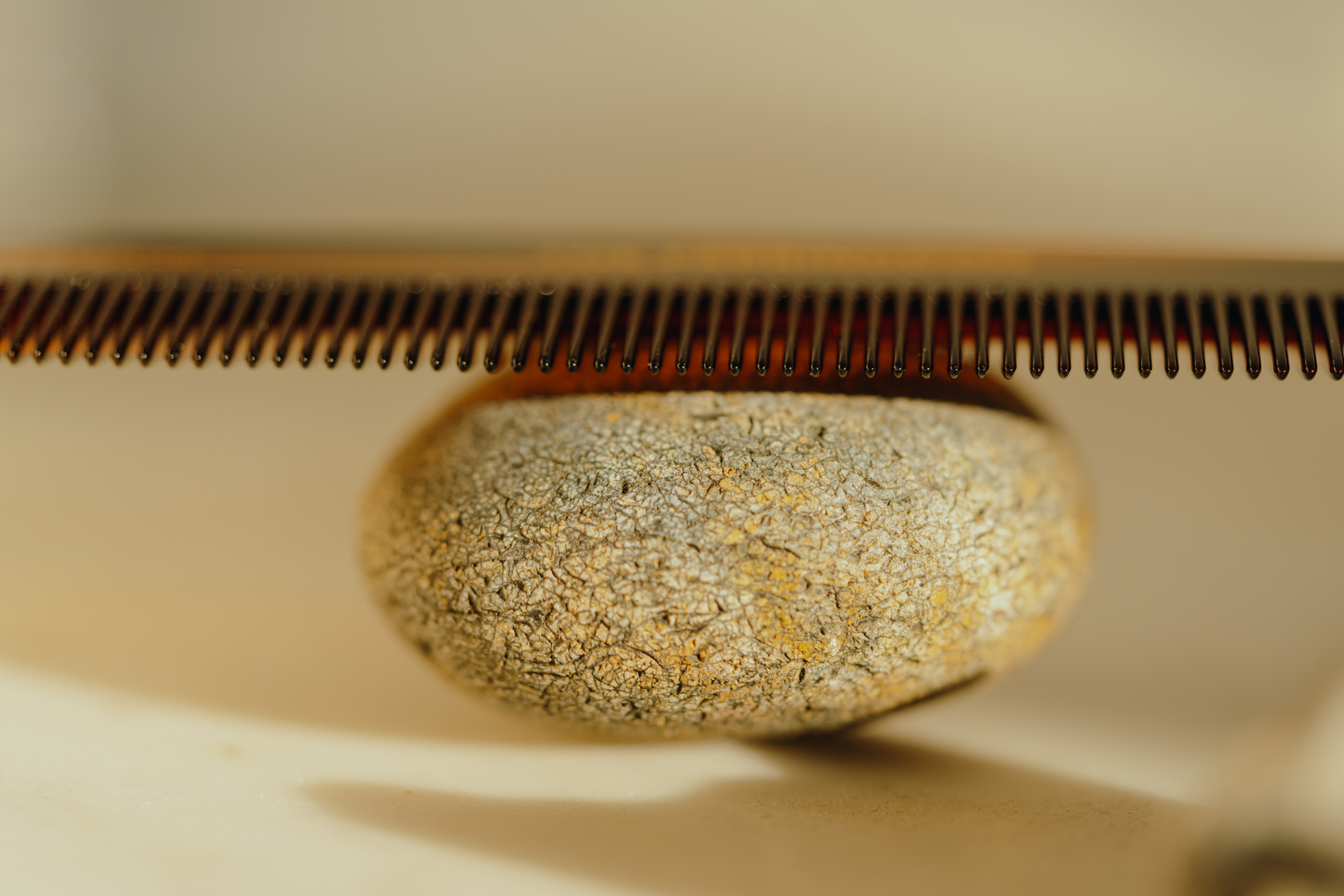 One of the oldest tools to be excavated by archaeologists was the comb. Discovered in Syria, the earliest known comb was made from animal bone and is said to date back to 8000 BC. Its form is, essentially, the same as the mass-produced plastic combs that we see today. Though it is believed that almost all early people independently invented the comb in some form or another, as they were discovered across many ancient civilizations in what is now modern-day Persia, Egypt, China and Japan. These early combs all bore a strikingly similar resemblance to one another: built with five or ten teeth, these early designs were intentional, and meant to mimic the shape of a human hand.

Designed with function in mind, the very first renditions were made of wood, stone, ivory and animal bones. But as combs increasingly became viewed as ornamental objects as opposed to functional ones, these materials gradually shifted from primitive substances to ones that signified luxury. In ancient China, combs were not only used for grooming purposes, but also for decoration. Made from bamboo or wood, they were meticulously crafted and decorated with colorful patterns, figures, symbols and landscapes, before being passed to the women of China’s most important families. When worn as hair accessories, these combs reflected one’s social status and wealth, such as the Changzhou comb, which was only allowed to be donned by members of the royal family. 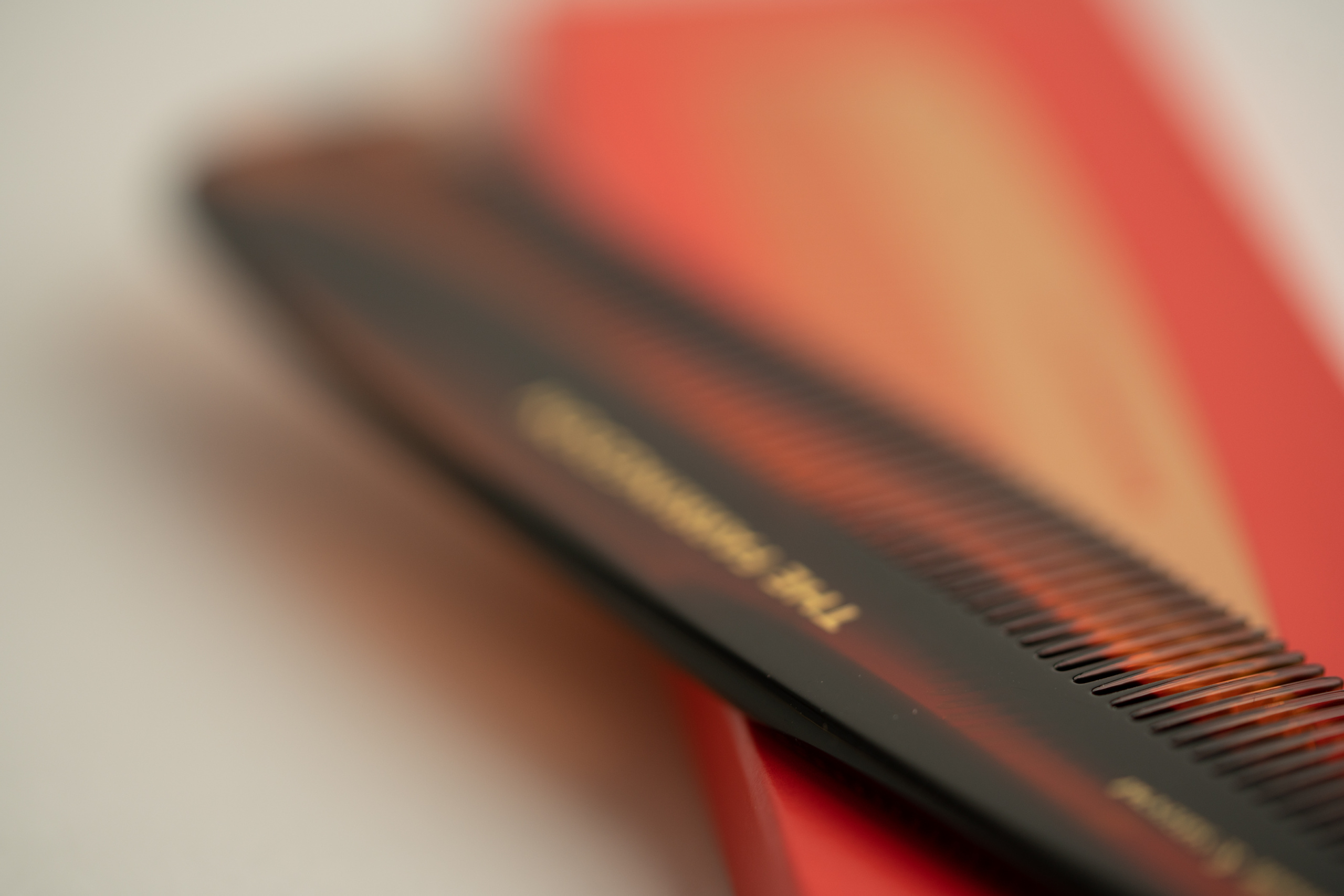 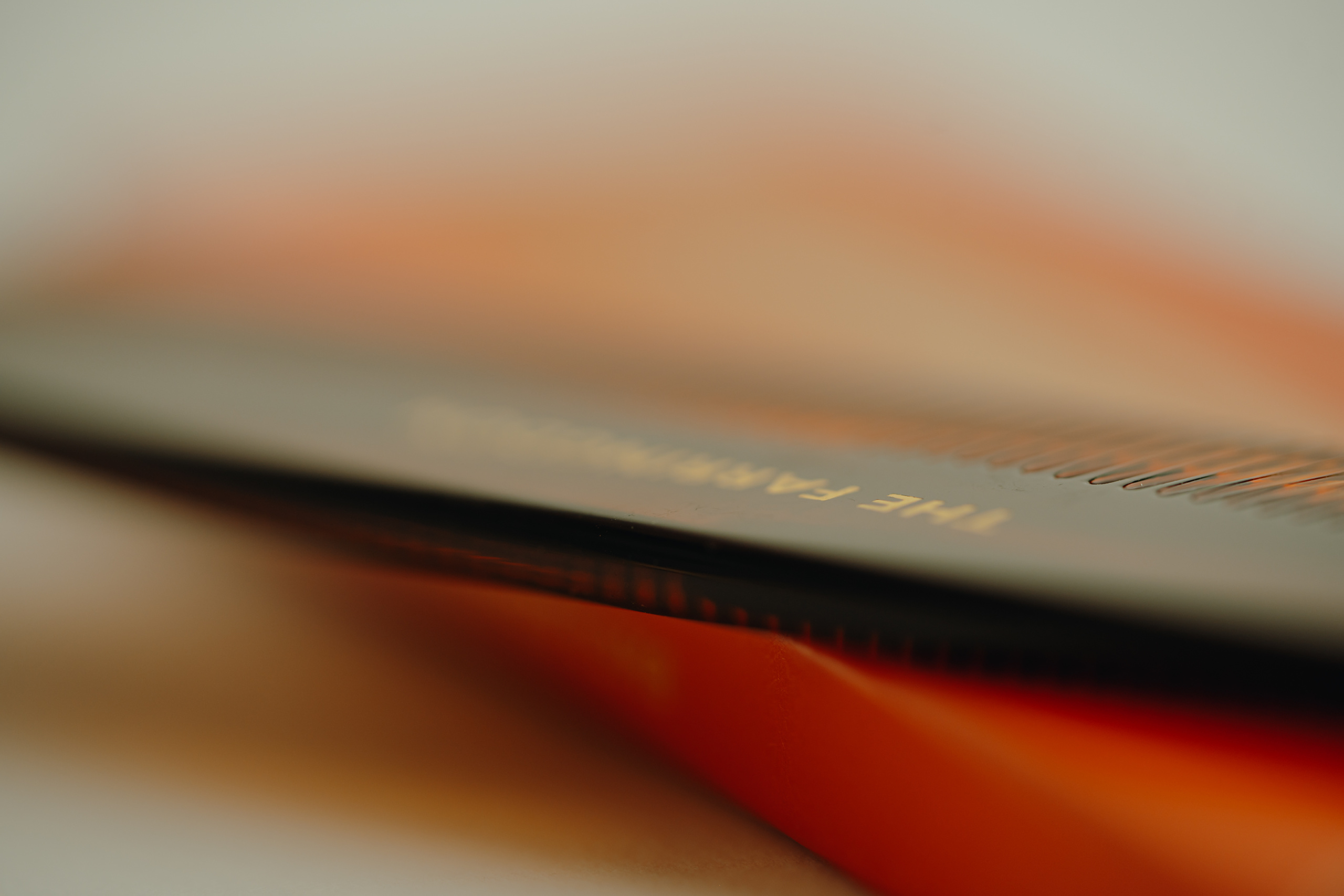 When donned as hair accessories, certain combs reflected one’s social status and wealth and were often worn only by members of the royal family.

Similarly, in ancient Egypt, combs were used as ceremonial objects that were often placed in the coffins of the deceased. The Predynastic period in Egypt saw wood as the most common material for comb making, while highly ordained ivory examples were considered luxury items, to be used only in ceremonies or as funeral offerings for the elite. The handles of these finely carved ivory combs often showcased detailed decoration and craftsmanship that symbolized deities associated with the inception of the universe – which suggested these combs were of greater significance than the ordinary instrument used to arrange hair.

It wasn’t until much later when the ancient Egyptians pioneered the double-sided comb, which featured both thick and fine teeth lines, that combs could be used simultaneously for grooming and styling. Subsequently, their ingenious design would become the standard model in both Europe and Asia for centuries to follow. 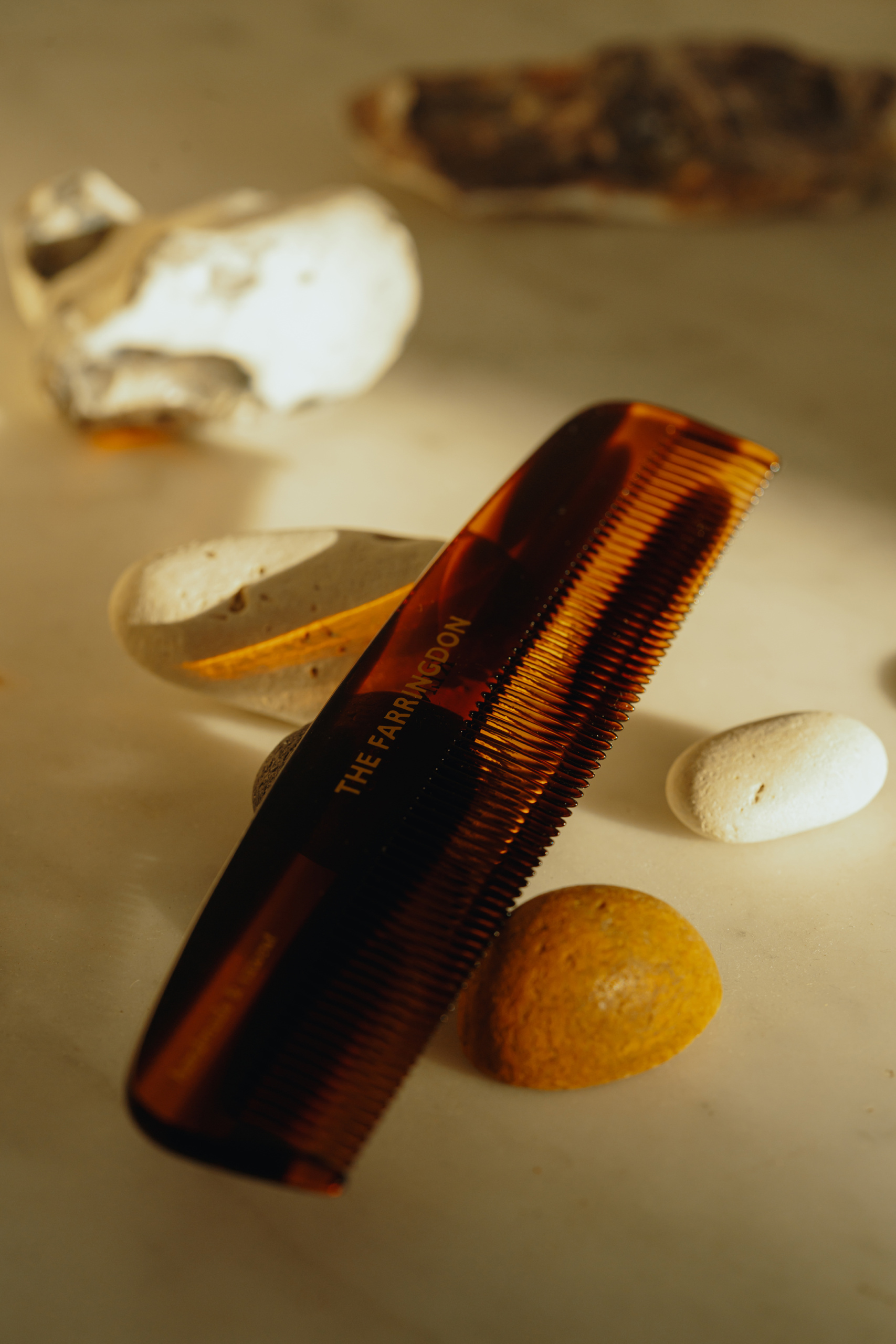 The Handles of these finely carved ivory combs often showcased detailed decoration and craftsmanship, and symbolized deities associated with the inception of the Universe.

Overseas, the first combs were produced in the United States by New England farmers in the late 1700s, though it wasn’t until the early 1800s that decorative hair combs came into fashion. It was around this time that metals, aluminum, brass, tortoiseshell and the hoofs of cattle or horses were also deemed appropriate for comb making, and would help to fulfill the increasing demand that would continue throughout the century.

Early 19th century designs were relatively simple in appearance. Though as the century advanced, ornamental hair combs became increasingly sought out, subsequently creating a market for one-of-a-kind designs. Of all the modern materials, tortoiseshell would prove to be widely desired in both the United States and in Europe. Embellished with precious stones and gold, it was the most highly favored and most fashionable material for years until it became difficult to source, and thus replaced by gutta-percha.

Near the end of the century just before combs dipped in popularity, Art Nouveau renditions, such as the creations of French jeweler René Lalique, would garner massive attention. Lalique crafted combs that showcased intricate designs, often combining unexpected materials such as diamonds, Baroque pearls, gold, glass and semiprecious stones. In 1896 he was also credited with introducing horn into the jewelry repertoire, which he sculpted to resemble flowers, waves, trees, butterflies, birds and more.

As if almost coming full circle, when Japan became accessible to the rest of the world during the second half of the 20th century, the culture began to inspire many European artists, not excluding Lalique. His horn comb, circa 1900, is decorated with a blue and green enameled mountain landscape, and trees at sunrise that are mirrored in the water below. The influence of the naturalism of Japanese art can also be seen in “Apple Tree” diadem, c. 1901– 02. Made from horn, diamonds and gold, the elegant apple tree is representative of the influence of botany that inspired so much of Lalique’s work throughout his career. 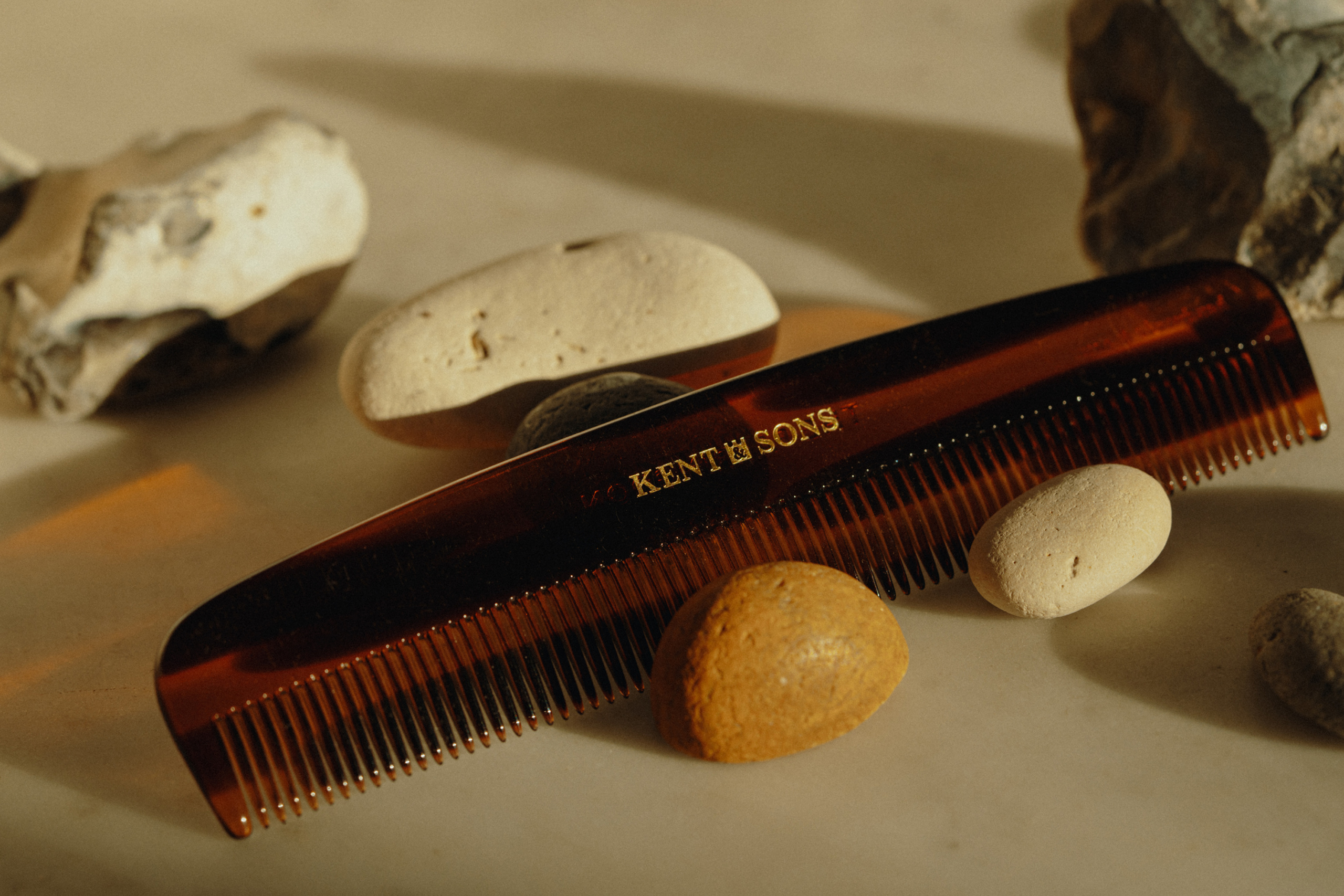 Maintaining their long-reigning popularity, the second industrial revolution allowed for the mass production of machine-made hair combs. This time around, the invention of plastic – cellulose acetate in particular – spelled the use of natural materials as the preferred medium for comb making, and allowed the growing middle class unbarred access to these once coveted accessories.

Combs lost much of their cultural relevance in the 20th century, however, as machine manufactured designs flooded the markets and consumers’ desire for unique, artisanal designs could not be satisfied. Only a small number of makers – such as Kent Brushes, who received the Royal Warrant as Brushmakers to Her Majesty – were able to claim the title of heritage brand and continued to make a portion of their products by hand. It was around this time that the decorative hair comb quietly fell from grace, and reverted wholly back to its original function: a tool to groom oneself with.