AROUND THE CLOCK, HOP!

Artist Katie Paterson collaborates with researchers and scientists worldwide, making the place we call home – our own Milky Way galaxy and far-off planetary systems – what would be a phone call away, practically winding the spindly cord of the E.T. handset right around our index fingers. 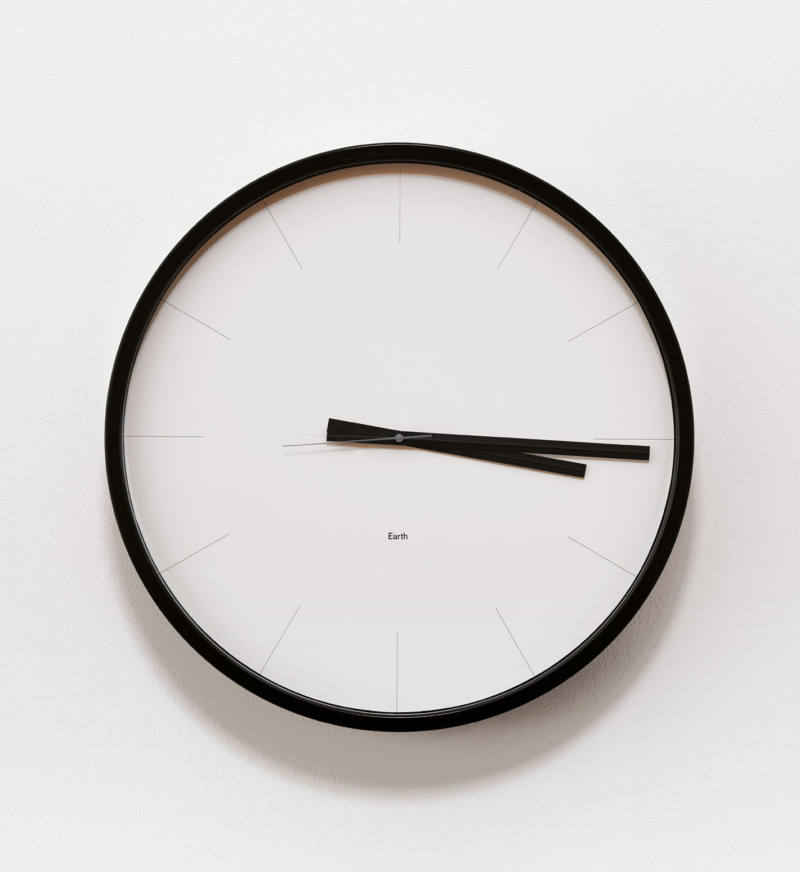 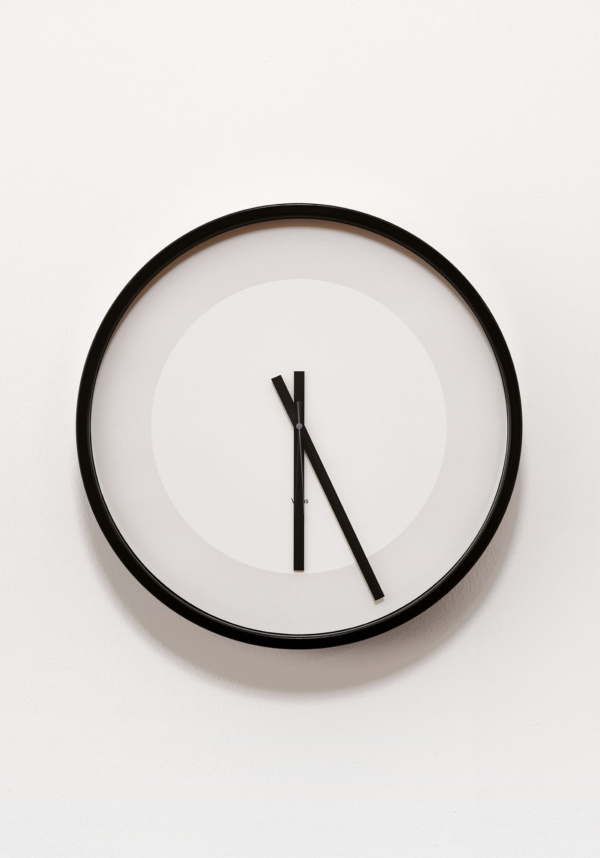 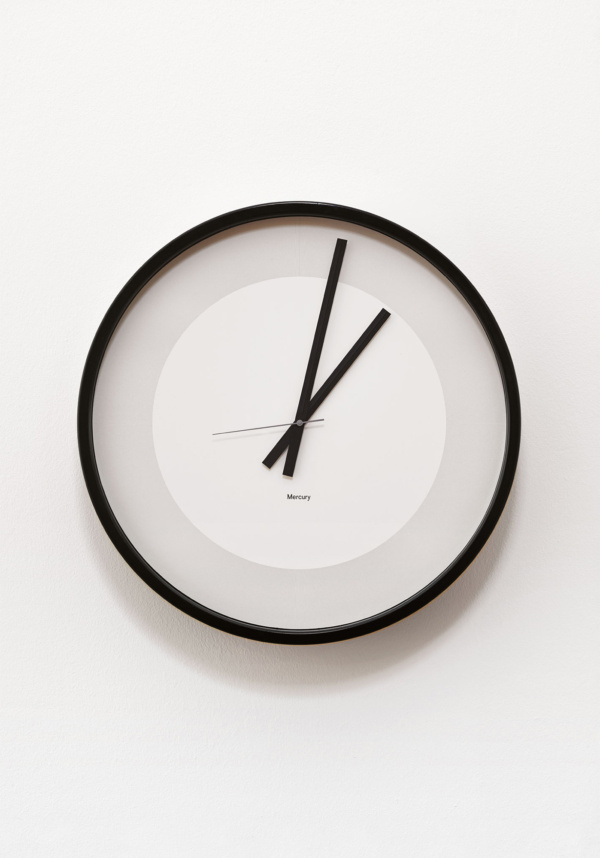 Katie Paterson’s playground lies smack dab in the heart of parallel universes traversing astronomy, geology, ecology and the concept of monumental time. Her aesthetics are as cool as a cucumber, sublimely romantic and neatly packaged with scientific backing. Critics have lauded Paterson for her uncanny ability to reconcile “the galactic and the mundane.”

In the exhibition Time: Past, Present, Future at the National Galleries of Scotland, Paterson’s Timepieces present a series of nine clocks that tell the time on every planet in our solar system and Earth’s Moon. Each clock has been adjusted to show the time in relation to the other planets and to Earth. The length of each day from Mercury to Neptune varies drastically, from the shortest days on Jupiter to the longest on Mercury.

While we’ve grown accustomed to our own way of telling time, it’s actually deeply tied up with celestial rhythms. Solar and lunar days differ to a great extent in the Milky Way galaxy and in neighboring universes. 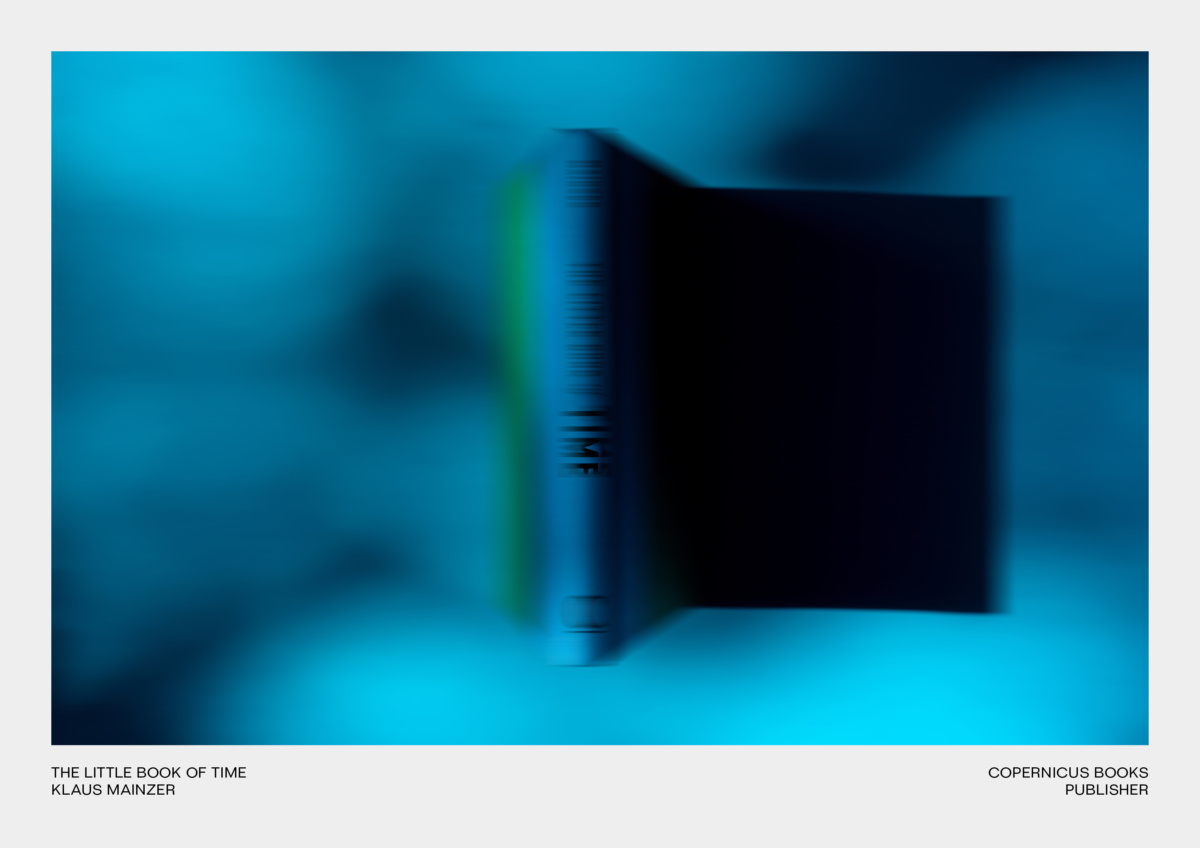 But what is time, really?
In The Little Book of Time written by Klaus Mainzer, the very concept of time is probed from antiquity all the way to the present. From the earliest astronomers’ attempts at deciphering solar and lunar phenomena to breakthroughs in time consciousness brought on by scientists like Newton, Hawking and Einstein, the book expounds on how time is very much up to human choice and not just painstaking science equations.

Indeed, humankind has been preoccupied with time since, well, the dawn of time. It can draw on slower than ever or fly by. We want to keep time, be on time, have time – the list goes on. Interestingly enough, while time has always been perceived to only move forward, a handful of religions and cultures, such as Hinduism, Buddhism and the Hopi people of northeastern Arizona, believe in a cyclical view. This train of thought is entwined with the natural rhythms and cycles of nature, the seasons, the tides and moon phases.

Mainzer’s theory is that each and every system which is based on motion – from subatomic particles to cells to planets – contains a “time operator”, which could be negative or positive no matter the scientific equation. In this way, time can actually flow backward or forward, yet we, and, not surprisingly, our scientific instruments, only experience time flowing forward. To explain this, Mainzer refers to the fascinating and convincing answers from thermodynamics research by the nineteenth-century physicist Ludwig Boltzmann. He then takes us into relativity’s incorporation of time into space-time, where time can theoretically come to a screeching halt or shift into reverse.

Delving inside the book:
“The end of the second millennium was merely a numerical occasion that left no significant traces on humanity. Even the date conversion of computer times was taken in stride by our worldwide information and communication networks. Instead, the widely anticipated catastrophes and dislocations took place at other times. This upholds the thesis expounded in this book: Apart from the external technical clock time, there exists an intrinsic systems time that controls the processes of structural change, growth, and aging in systems ranging from organisms, populations, and institutions to states, cultures, and societies. Even the Universe is subject to phases of renewal and aging that are distinct from the external measured time. We therefore ought to spend less time watching the clock, and should take note of the inner temporal rhythms of nature and society.”

The Rolling Stones enthusiastically sang “Baby, baby, baby, you’re out of time,” in their Aftermath album from 1966. We beg to differ – it’s all relative, really, unless we’re talking about 2020. In that case, we call dibs on time flowing forward.